Set off with a friend* through a wild, woolly world in this grand Yoshi™ adventure! A treasure trove of clever handicraft stages are ready for you to explore. Unravel their secrets and color your world with a spectrum of yarn balls to knit new paths and get every last collectible.

Knitting yarn, patchwork, and other handicraft materials combine into a whimsical and crafty backdrop for our knit Yoshi to explore. Instead of eggs, this time Yoshi tosses yarn balls that he can use to clear blocked paths, tangle-up enemies, or even knit together platforms and warp pipes. Yoshi can also tug at stray yarn to unravel walls and reveal hard-to-reach areas filled with hidden collectibles. Tackle challenges in local 2-Player co-op by partnering up with a friend. Gobble ’em up and spit ’em out to reach new heights or take out craftwork creepers like paratroopas, piranha plants and shy guys! It’s time to get crafty.

Get the yoshi’s woolly world for free below! 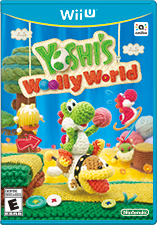